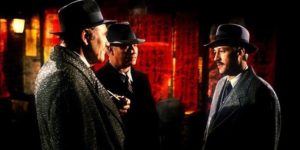 Hammett is a 1982 American neo-noir mystery film directed by Wim Wenders and executive produced by Francis Ford Coppola. The screenplay was written by Ross Thomas and Dennis O’Flaherty, based on the novel of the same name by Joe Gores. It stars Frederic Forrest as detective story writer Dashiell Hammett, who gets caught up in a mystery very much like one of his own stories. Marilu Henner plays Hammett’s neighbor, Kit Conger and Peter Boyle plays Jimmy Ryan, an old friend from Hammett’s days as a Pinkerton agent. The film was entered into the 1982 Cannes Film Festival.