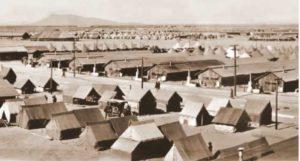 Author and historian Jim Eckles will talk about the surprising story of Camp Cody in Deming during World War I. Admission is free.

Just over a century ago World War I, the war to end all wars, ended with millions killed. As a military power, the United States was woefully unprepared for its role as the steamroller to break the stalemate in the bloody trenches of France. Immediately after declaring war on Germany, America had to raise and train a multi-million-man army.

One of the nation’s 32 training camps was established at Deming, a town of only 2,500 people at the time. The facility was dubbed Camp Cody and was erected in just a few months to house and train 30,000 men. The men, from farmers to factory workers, had to learn a new kind of fighting and mass killing – with machine guns and artillery. Then, a few months after armistice – poof – the camp, with its tents, wooden mess halls and large stables literally disappeared.

Obvious questions are: Why select little Deming to host a huge camp? What was it like in the camp living day-to-day for months in a tent? And how did Camp Cody affect Deming?

Jim Eckles is a local historian and retiree from White Sands Missile Range where he worked for 30 years. Camp Cody caught his attention when he was asked to lecture on the V-2 rocket and the Trinity Site atomic bomb test at a World War II round-table in Minneapolis. Before his talk, Eckles discovered organizers seemed more interested in what he knew about Camp Cody instead of the WWII technology. Subsequent research opened the door to an all-but-forgotten chapter in southern New Mexico’s World War I history. Who knew almost 30,000 men once lived just north of I-10 in Deming? This led to a book about the camp that Eckles will use for the basis of his talk. 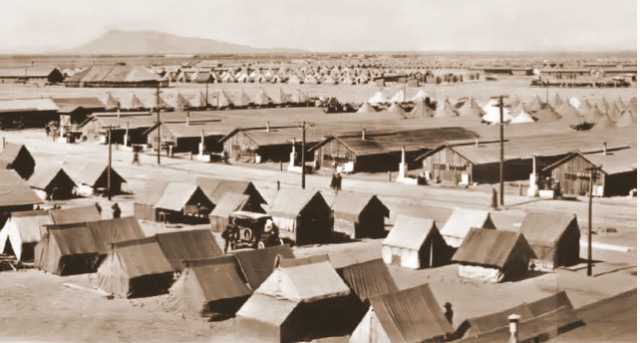